Cannon gets a new home

On 6 April 2005, the first artifact arrived at our park. It is a M114A2, medium towed Howitzer. This weapon was first produced in 1942 as medium artillery. This weapon uses NATO standard 155mm ammunition with a range of about 14,000 meters. It was used during World War II, in Korea and Vietnam. Until recently, they were in service with the National Guard. 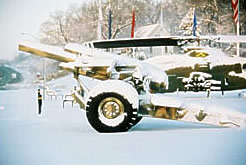 The 155 Howitzer was considered obsolete by the time it was deployed to Vietnam. It was no match for the 155mm self propelled weapon supporting conventional operations against a highly mobile, heavily armored enemy.

The Vietnam War, however, was not conventional warfare and this Howitzer which was thought by many to be obsolete and out of date; proved to be invaluable. It was designed to be towed behind another vehicle, this usually being a 2 ½ ton truck, and needing up to three support vehicles to carry ammo and powder bags. The Howitzer was light weight enough to be displaced by a helicopter and could provide medium artillery support to infantry forces hidden deep in the jungle and where roads were non-existent. Warfare had taken on a new look and the towed Howitzer had another war to fight.

Our 155 Howitzer had to be de-milled and made incapable of firing when it arrived at veteran’s memorial park. Commission member Dick Herbon did the welding by securing various parts of the Howitzer. The Rock Island arsenal agreed to inspect and certify the De-mill procedure and their team of experts performed an invaluable service for our park. After the certification; the Howitzer was badly in need of sandblasting and fresh paint. The Park commission decided on painting it a desert-tan camo scheme. You can see this by clicking on the pictures at the bottom of the page.