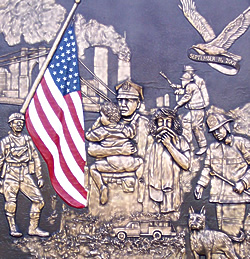 The events of 11 September 2001 were being televised and radio reports were broadcast as member of the commission were working on Veterans’ Memorial Park. We were shocked and angered by what we saw and heard. An attack of this magnitude was unheard of and almost incomprehensible. The events were broadcast on all stations and as the days passed and the news updates became more horrific, we realized that this was indeed an act of terrorism. Patriotism entered the soul of all Americans. As the death toll mounted acts of bravery and compassion were reported by the media only to be followed by another story of Americans risking their lives to save others. These stories touched all of us.

Shortly after September 11, the Dixon Fire Department purchased a large bronze plaque measuring 59” x 89” honoring those men and women. This plaque displays events of 11 September, including the Pentagon smoldering after being struck by the terrorist plane. This plaque is a magnificent display of the courage that was shown by those individuals.

When the city and rural fire chief, Mike Wilcox and Kevin Lalley, offered this plaque to the Veterans’ Memorial Park for display, we quickly accepted. We feel that the events of 11 September 2001 fit well into the theme of our park, “Lest We Forget."

This beautiful plaque is located near the exit of Veterans’ Memorial Park and is mounted on twin steel beams. At night, it is lit by a flood light so visitors may view it at any time. At the bottom of the plaque are the words, “We Remember."