Early in the 60’s, the US military had a couple of problems on its hands. One was the huge Soviet build-up of tanks along the East-West border in Europe. The other was how to provide ground forces in Vietnam with support they so badly needed. The call went out to various helicopter manufactures to design an attack helicopter which could provide adequate ground support for combat troops and have the capabilities to knockout an enemy tank.

Extensive tests were conducted against tanks to help with the European problems of massive soviet tank buildup. These tests demonstrated that anti-armor helicopter teams properly trained and deployed could achieve high ratios of armored vehicles destroyed for every missile-firing helicopter los

Bell came forward with a design the military liked and a production contract was offered for 110 aircraft. The Grand Daddy of all attack helicopters was born in April 1966. It arrived in Vietnam in June 1967 and amassed over a million operational hours. Named the Cobra, it was known by troops as the “Snake”. The way was paved for the development of the modern attack and scout helicopter. These principles would take Army aviation into the next century. 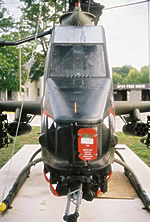 Some of the characteristics of a Cobra AH-1F are:

The narrative audio comes from the USMC Combat Helicopter Association. This particular Cobra was used in the US Army.

Three months after being born, this Cobra was flying missions in Vietnam. It was assigned to the 7th squadron of the 1st Air Cavalry Division. It was then stationed in Vietnam. It stayed with the 1st Cavalry Division during its entire combat tour of duty. Since many visitors to our Memorial Park have voiced an interest as to the actual history of this “fighting Lady”, we have decided to add this segment to our website. As you read this, please remember that she has five purple hearts for damage from hostile enemy ground fire. Her cockpit has been splattered with American blood from both the pilot and weapons officer. At no time was she lost or destroyed. She was retrieved and brought back to base camp, repaired and lived to fight again. The most important fact regarding this Helicopter is that all that flew with her lived! The holes in her side, the signs of leaking hydraulic fluid, the transmission problems and rotors that were shot up, and the American blood that spilled onto her floor did not keep her from bringing all who flew her back alive.

To everyone who was a member of the 1st Air Cavalry Unit in Vietnam, please stop by the park and see one of the original Gunships. If you were a of the 9th infantry division in Vietnam stop by and see first hand one of the “Snakes” that supported your division and was responsible for saving many lives. If you’re like me and just like Cobras, stop by and look at the Grand Daddy of all attack helicopters.

Please use the following links for additional information:

Note: Many people have visited our park as it was being constructed. Almost every visitor would stop by the Cobra and want to see inside the cockpit. After watching people climb up to the cockpit time after time, the park commissioners decided to build a set of steps with a landing so people could view the inside of the cockpit safely. The landing is high enough off the ground for small children to comfortably view the Cobra's interior and its contents. If you visit our park, please look inside the Cobra but please do not climb on her!