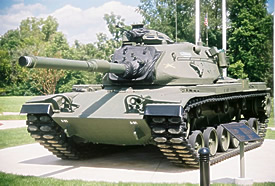 On the battlefield to the front line soldier or any combat soldier the shouted phase “tanks are coming, tanks are coming” meant that it was going to be a bad damn day. No individual soldier with him or in his backpack any means of stopping a tank. The fear was instant and it was very real.

In 1957, it was determined that the Soviets were in the process of developing a new medium tank, the T-55, with a 100mm gun that was superior to any American tank. In response, the M-60 was born. Every component was upgraded on the M-60 and it entered service in 1960. It was the main battle tank of U.S. forces, up to 1980.

The M-60 saw some combat action in Vietnam. The terrain and its heavyweight hampered its effectiveness. Rice paddies and monsoon soaked fields were muddy quagmires.

In open country or conventional warfare, this tank excelled. This tank was quickly shipped to Germany and other frontline countries, as upgrades took place. The M-60 turret is organized in typical American fashion with the gunner on the right, the commander directly behind him, and the loader to the left and rear of the 105mm gun. The turret interior is roomy in comparison to other main battle tanks of the 1960’s era. It weighs 58 tons with a crew of four.

Going into Desert Shield, the marines’ main battle tank was the M-60A1. It was an improvement over the M-48 of the Korean and Vietnam era. It was considered equal to the Soviet T-72, which was the mainstay of the Iraq inventory. The 1st Marine Expeditionary Force fielded 210 M-60’s to support the Saudi-Marine Corp. into Kuwait City.

This tank is still in service in over 22 countries world wide. It is now found primarily in U.S. Reserve and National Guard units.

The M60 tank is designed to function as one of the main assault vehicles of an Armor/Mechanized Infantry/Infantry Division. The main armament is capable of defeating enemy armored and is suitable as an assault weapon in offensive operations. The vehicle can be employed at night and under conditions of limited visibility.

In the spring of 2007, Steve Kenney who served with the 8th Infantry Division in Germany talked to several park commissioners about giving the tank a badly needed coat of paint. The sprockets, track and the front of the tank were all rusting. The turret and back of the tank were peeling. It looked like a tank that had been on display far too long. As you looked at the tank today; it appeared glossy, shiny and reflected light. It also seemed to ignore all the camouflage lessons learned from the German army in WWII.

In speaking to the Army; the original color was a very dark green bordering on black. The Army informed us that this was the way the tank was painted as it exited the factory. And if we wanted to keep the tank original we should paint it the same color. After talking to veteran tankers, we decided to go with Olive green.

In June 2007 prep work on the tank was under way. Steve and a park commissioner started grinding away the peeling paint and rust in the cool mornings and stopped when the metal was to hot to touch. The tank was primed and we started the painting. The tank, road wheels and sprockets were painted Olive green much the same color as your standard issue field jacket and the track and rubber fenders were painted black.

We numbered our tank A-01 as it is the only tank in our park. The combat armor insignia was added to each side of the turret as well as a unit ID insignia. Green water cans and 50 cal ammo cans were added. Communication antennas were purchased and mounted on the top of the turret. To give the “Big Bear” some bite we installed an M-85 machine gun and a 7.62 smaller machine gun. Inert 105mm tank rounds were placed on display beside the tank. Our tank took on a whole new look!