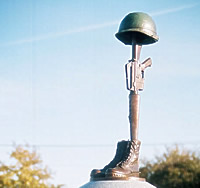 As more and more people visit our Memorial Park the commission decided that a sign was needed to help direct people to the park and to insure them that they were at the right place once the arrived. Our architect was asked to design a sign to fit our needs and find a place in our park where it could be placed. At the next commission meeting he submitted a drawing and it was adopted with very little discussion.

Two large granite slabs which would be engraved with our parks name were ordered. A round granite column was also ordered at the same time to display a Battlefield Cross which has been talked about for two years but could not be agreed upon as to where it should be placed within the park.  Also two bronze purple hearts were wanted so that they could be placed on the inside wall of our sign.

After searching for sculptors and artists for the battle cross; Andrew Chernak of Coventry Pewter in Springfield Pa. was contacted and asked if he would make this bronze statue for our park.  In mid March 2007 ideas were exchanged and an agreement had been reached.  The Battlefield Cross was now in production.  Keeping in contact with park officials, Andrew announced in mid Sept 2007 that the statue was finished and ready for delivery.  At the exact time that our statue was completed Viet Now was holding a gold star mothers banquet in Philadelphia. Permission was granted to display our field cross on the speakers podium.  The first public’s display of our Field Cross was on 29 Sept. 2007 at this banquet.  On Oct 4th it was placed on the granite pedestal in our Veterans Memorial Park.

The two purple hearts were made in Louisiana by Don Baker of Plaques and Letters. Less than 2 months after contacting Don the bronze plaques were on there way to Dixon.  The colors match the colors of the official Purple Heart.

With the walls and columns in place, the purple hearts attached to the walls, and the Battlefield cross on top of the column, the only thing left to do was light the sign at night.  Eight flood lights were purchased and had been sitting in boxes waiting for installation.