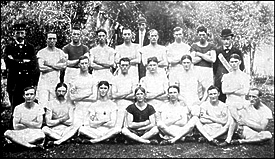 "Inspector of the Firewood"
It was not unusual to see men, women and children fighting a fire in earlier days. Towns that sprang up did not have fire protection as is the case of our cities and towns of today. Fire fighters were then known as the "bucket brigade" and generally anyone that showed up at the scene of a fire were put to work and utilized in helping. Water was usually taken from nearby wells, cisterns and even horse troughs. Only fires which were near the river could be fought with an unlimited supply of water. Stories from as early as 1861, show the first fire chief being called "Inspector of the firewood."

On April 18, 1872, the Illinois General Assembly gave approval for a corporation known as the "Monitor Hook and Ladder Company No. 1 of Dixon, Illinois." A fire fighting company was organized by Noah G. Bittner, William Saimby, John A. Stumpf, Carleton and Corydon Cropsey and were finally granted a charter by Illinois Secretary of State, Henry D. Dement in August of 1881.

Dixon's early day firemen would answer alarms by pulling a cart containing a tank and water hoses to the scene of the fire. The buildings in those early days were made of wood or stone and only a few had tin roofs. In most instances if a fire had much of a start before being discovered, there was little hope of saving the building or in some cases, those around it. 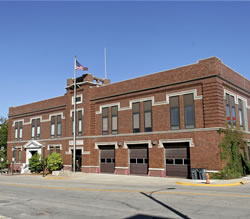 The first fire station built in Dixon occurred in 1871, with a building located at Second Street and Hennepin Avenue which is the site of the present city hall, and then faced west to Hennepin Avenue. Rooms on the upper floor were used for meetings and the lower area was for fire equipment. Horses were later used to pull their fire wagons and carts loaded with equipment and stopped running to fires. Present fire department quarters were constructed in 1907, with the horses stabled in the rear of the present fire department. Pulleys were used to hold the harness up against the ceiling. The horses would be backed into position and the harness was lowered into place and the hookup to the cart or wagon was made. Sleeping quarters for today's firemen were used the for storage of hay and oats for the horses.

Just prior to World War I the department started using motor driven vehicles.

As early as 1869, the city had pressurized water when the Water Power Company installed a rotary pump with a rated capacity of 1,200 gallons per minute. The city assumed responsibility for this pump when the fire department was formed along with 600 feet of hose. An additional 1,000 feet of hose, hose reels, hook and ladder truck and other necessary equipment was purchased.

During the winter of 1871-1872 water mains were laid from the pump to the corner of Galena and Main (First Street today) and then to the corner of Second and Hennepin. By 1876, the city had put in a piston pump which was now capable of operating at 1,600 gallons a minute. Problems arose as the small water mains previously laid prevented the pump from being used at full capacity.

Dixon has had it's share of Major Fires
There have been a number of major fires in Dixon and early records show that on Aug. 2, 1856, a stable belonging to the Mansion House burned down. It was at the time believed to be arson and eleven horses perished in that fire. On Oct. 14, 1859, a total of 20 businessmen were victims of flames when seventeen buildings burned covering more than half a block on both sides of Main Street. Dixon's first fire fatality was recorded on Feb. 8, 1865, when a house in Dement Town, which belonged to Col. John Dement, burned down at 3 a.m. in the morning. The house occupied by a Mr. Peifer, who died trying to save valuables from the fire.

An industrial fire on March 12, 1873, destroyed Knitting Mills, the roof of the Flax Company and machinery. On April 8, 1880, probably the most disastrous fire ever in Dixon occurred in what was then the heart of the industrial area, the Water Power site near the river. W.P. Thompson's Flouring Mill and S.C. Bell's Flax and Bagging Factory were destroyed. The Amboy Fire Department had been telegraphed for assistance, arriving in time to save Brown's Machine Shop, John Dement's Flax Mill and the Curtis Plow Factory. The Pump House by this time was burned and the Dixon Hose Company joined in with the citizens to complete a bucket line. Estimated loss of this fire was $250,000 at the time.

June 23, 1903, a major fire at the Dixon Opera House which destroyed completely the roof and second and third floors of the building. Mrs. E.M. Truman who owned the building announced shortly after the fire that the Opera House would be rebuilt as quickly as possible. Some 17 years later on Feb. 17, 1920, the Opera House sustained another fire and now was gone. The Evening Telegraph reported the next day that, "A blackened stone wall and a pit filled with charred smoking and steaming debris are today all that remain of the three-story building known as the Dixon Opera House Block, the home of five business institutions, a physician, a shoe-shining parlor and the city's only 'legitimate' playhouse." It was reported that over 1,000,000 gallons of water were used on the flames of this fire. Numerous other fires throughout the city's history have left their mark for not only the business but also in the residential, church and school establishments.

Dedication to Duty: Past & Present
Other than the modern day equipment used and the methods employed to fight the fires, along with many more services provided today there is not much difference in the firemen of today compared to those of yesteryear. There still remains that important ingredient, and that is they are still dedicated to serving their community, protecting property and saving lives.

Now-a-days you can visit the firehouse and perhaps don a fireman's hat, sit behind the steering wheel of a massive fire truck and even get to ring the fire bell. But somehow, it's just not the same as in the old days when the horses would anxiously await your visit, along with the sack you carried containing a few apples or carrots.

Tweet
Published in Fire Department
More in this category: « Public Safety
back to top