Beyond the scope of standard equipment such as patrol cars, bicycle patrols, and canine teams, our agency also maintains a Tactical Response Team (TRT).

Some of the fields the team has trained in include: 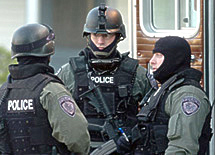 TRT is made up of 9 Dixon Police Officers and can be activated to respond within a short period of time to any type of critical incident.

Published in Inside the Dixon Police Dept.
More in this category: « K-9 Patrol Unit Bicycle Patrol »
back to top