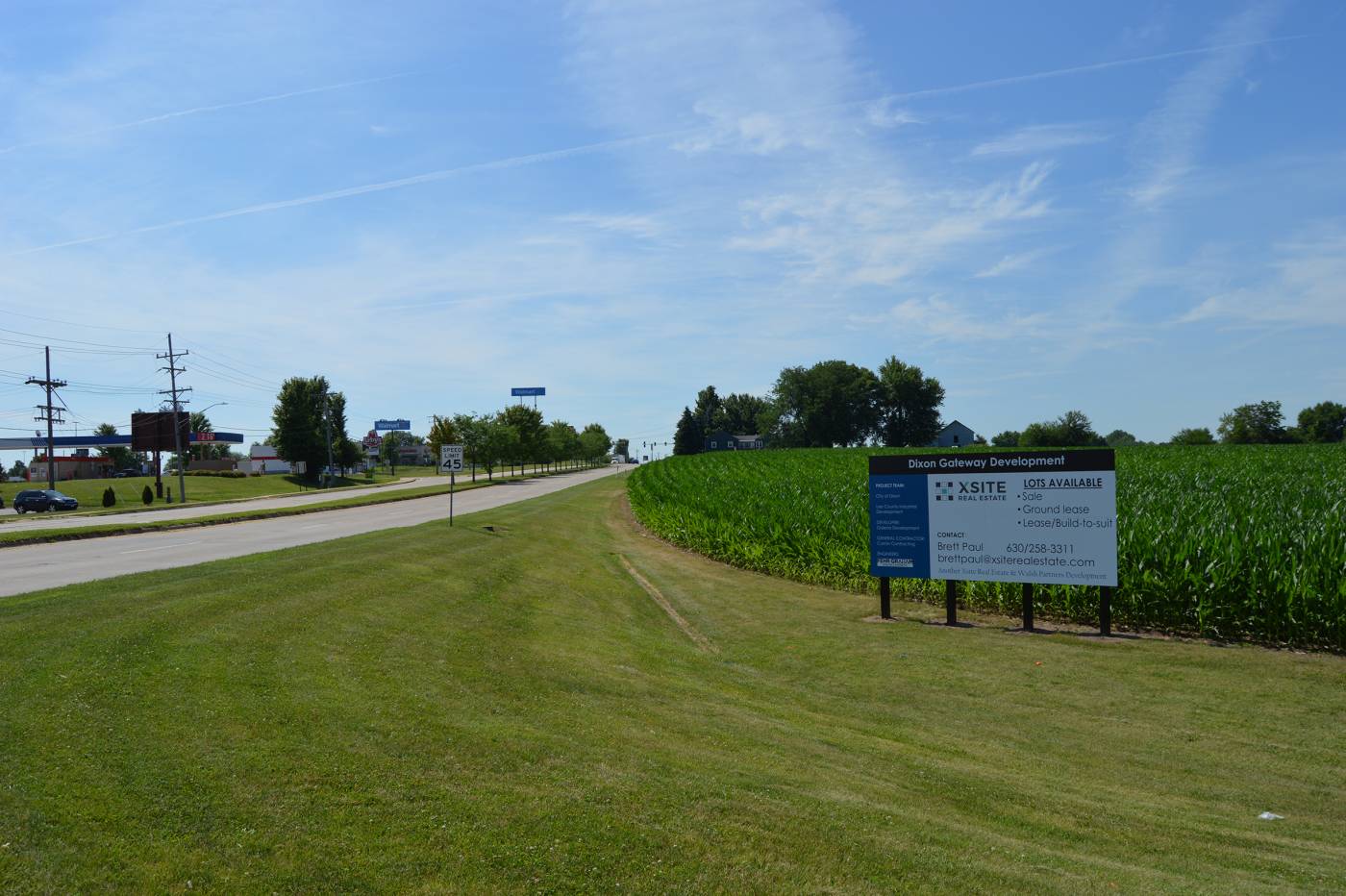 For the past two and a half years, the City of Dixon and Lee County Industrial Development Association (LCIDA) have been aggressively pursuing development in the I-88 corridor near Wal-Mart.  Economic development has been one of the top three priorities for the Dixon City Council, which are (1) Infrastructure, (2) Economic Development and, (3) Public Safety.  Dixon has also made a substantial investment in the arts and culture community, which has significantly increased quality of life.  Dixon was recently featured as a “regional hug” by the Center for Governmental Studies at Northern Illinois University.

Over the past couple of years, Dixon has seen increased business development, especially in the service-based sector.  Dement Town has been revitalized near  Flynnie’s with the addition of Lil Smoked.  The City finished a $1 million infrastructure project in this area which also serves IDOT and MOST Plumbing.  Downtown Dixon is thriving and has seen many new businesses and is known as a destination for diverse businesses, including three women’s boutiques.  A major riverfront development, “Viaduct Point” is in the early stages as the United States EPA finished over $3 million of environmental remediation in the old junk yard.

A major piece of the economic development strategy is the I-88 corridor.  Local officials feel the area is  under-served by hospitality and restaurant type businesses.  From Aurora to the Quad Cities there are limited restaurants, gas stations, and hotels immediately accessible from the highway.  This has been a top priority for City Officials and LCIDA.

Today, the City, LCIDA, Xsite Realty and Walsh Partners are announcing a major development on the “Gateway Project.”  This project is officially underway with a definitive agreement to purchase 27 acres of land on the west side of Galena Avenue between Keul and Bloody Gulch Roads for commercial development.    Marketing of the Dixon Gateway Development project will begin immediately with a focus on hospitality related businesses such as restaurant, lodging, and fueling entities, along with other potential commercial users in the service and retail industries.

Commenting on the new development,  Dixon Mayor Li Arellano said “Building up Dixon’s I-88 exchange corridor has long been a community goal.   This joint project is a major development that builds on previous successes and partnerships to advance that goal.  It is a huge win for  Dixon and a boon for travelers,  because it will firmly cement Dixon’s position as the best travel stop in our region!”

Based in suburban Burr Ridge, Xsite has a demonstrated record of success in Dixon as the developer of Presidential Parkway Plaza; a 4 building project located north of WalMart along the south side of Keul Rd.  According to Xsite President Bill Paul, “We have enjoyed working in Dixon to bring new retail and food options to the community.  Dixon City officials have always been fair to work with and very supportive of responsible growth in the community.  We look forward to this new opportunity here.”

According to Dixon City Manager Danny Langloss,  “Dixon is on the move.  We have put together an incredible economic development team that has resulted in this major success for Dixon.  Over the past 2 ½ years, we made a major breakthrough with the landowners and have gained the support of a trusted and proven economic development partner.  This is game changing for our community.” Langloss added, “We are confident that the team of Xsite and Walsh will get the project done and bring new services and amenities to the community along with the resulting property and sales tax revenues to local government including the City,  Schools, and County.”

Charles H. Walsh Jr. of Walsh Partners based in Elmhurst added, “With the rich history that is Dixon and the fact that you have a City government excited to partner with experienced developers, makes it all the more comforting when you have the public and private sectors jointly focused on the same goals of a commercial development!  We are really looking forward to our partnership with the City of Dixon. ”

The project area is within the Lee / Ogle Enterprise Zone which provides short term property tax abatements, sales tax waivers on building materials, along with other incentives to developers.  In addition, the area is also covered by the federal Opportunity Zone Program which offers preferred tax treatment to some forms of investment in the zone.

Lee County Industrial Development Director Kevin Marx expects the project to draw customers from both the community as well as travelers on I-88.  “The Dixon tollway interchange is one of the few access points between Aurora and the Quad Cities that offers hospitality services visible and accessible immediately at the entrance / exit.  We expect this development to further strengthen Dixon’s position as an attractive stop on the tollway for food, fuel, and lodging.”

The City has applied for two major grants that will help with the infrastructure for the project.  The preliminary land plat envisions up to a dozen tenant building sites with infrastructure construction expected to begin in 2021. 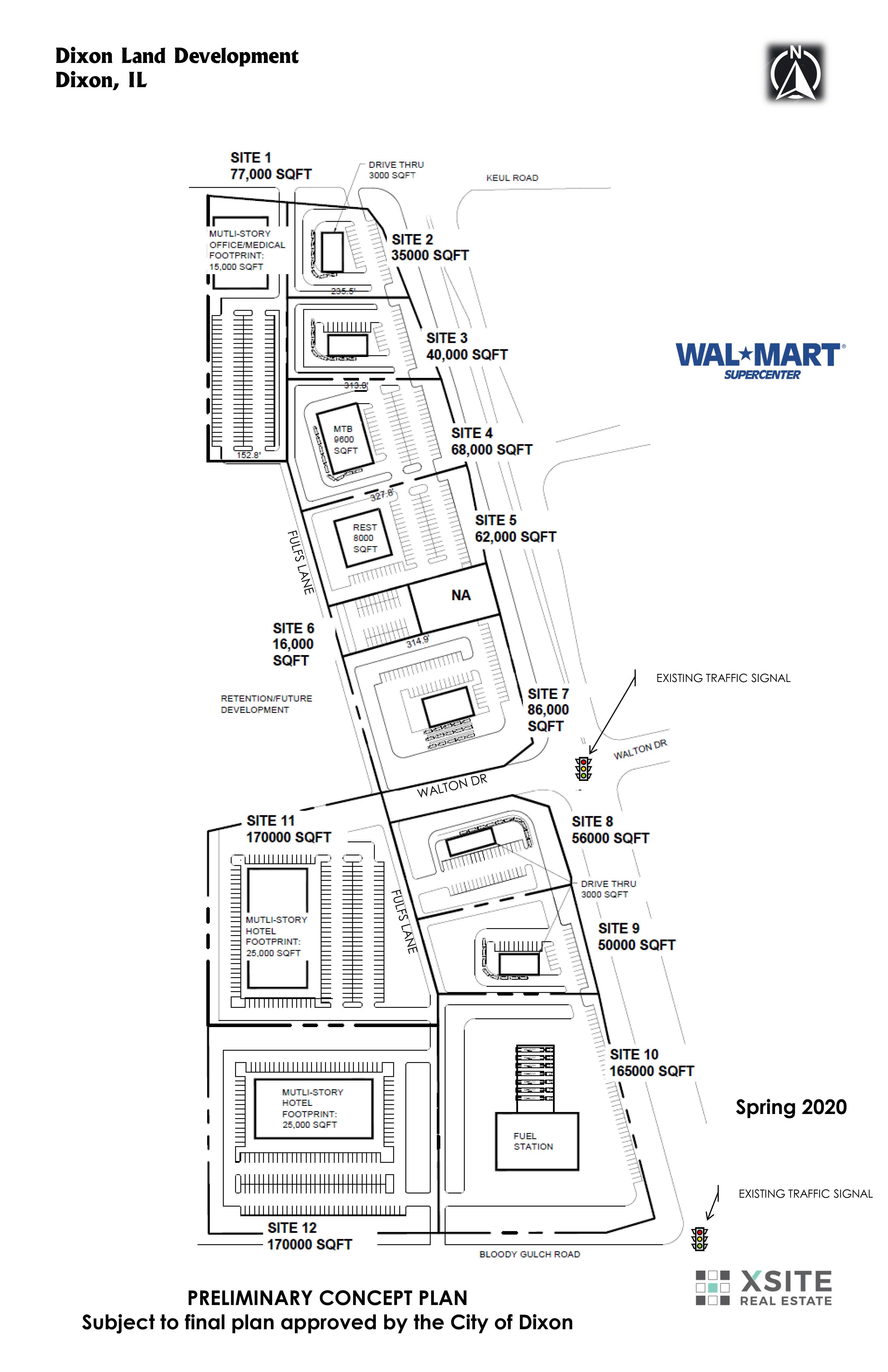