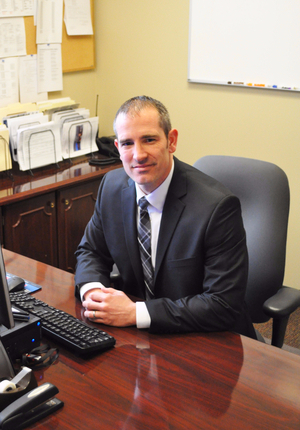 Dixon Police Department Detective Sergeant Steven C. Howell, Jr. has been appointed to serve as the next Dixon Police Chief.  Howell, 42, is a 34 year Dixon resident and an 18 year veteran of the department.  Howell was selected following an extensive interview process administered by an advisory committee of city leaders, distinguished police chiefs, and other key stakeholders.  The committee had been created to assist the City Council and City Manager Danny Langloss in providing an independent, merit-based selection process.

Initially, six Dixon Police Officers applied for the position.  The position was posted internally.  The pool of applicants was reduced to five late last Friday afternoon when one of the applicants decided to withdraw.   The advisory committee narrowed the search to two finalists and then gave the City Manager a clear recommendation to pick Howell.  With their recommendation, three of the last four police chiefs have been selected from the Detective Sergeant position.  The prior two were Chief Robert Short and Chief Danny Langloss.

Howell graduated from Dixon High School in 1994 and is a 6 year military veteran.  Howell began his career as a patrol officer in 1999, was appointed as a Designated Officer In Charge of a patrol shift in 2002, served as a school resource officer for nearly 2 years, and then served as a detective before he was promoted to Sergeant in 2008.  In 2015, Howell became the Detective Sergeant and has led all major investigations for the past 2 years.  Howell has extensive background in emergency operations and served on the Tactical Response Team for 14 years.  For the past 5 years, Howell has served on the Lee County Drug Court, a very progressive alternative court program that helps those suffering from addiction.  Howell has been instrumental in the Safe Passage Initiative for the past 2 years.

City Manager Danny Langloss said, “We had many qualified applicants for this process, but Howell’s progressive leadership style and strong contributions and commitment to the goals and innovative strategies of the department stood out to the entire committee.”  During the prior 2 sergeant promotional exam processes, a significant number of the officers engaged in the process named Howell as the best leader they have ever worked for.   Langloss added, “It was critically important to not only hire a great leader, but to select a person who has been instrumental in the community policing and progressive programs that make our department great.  The Council made it very clear they want the Dixon Police Department to continue as a leader in our area.  I have complete confidence in Howell’s ability to lead the department forward.”

Mayor Li Arellano said, “The Dixon Police Department has built itself into a talented, highly respected public safety organization. Having a strong, dynamic police chief is critical to maintaining that high level of service for the Dixon community. Steve Howell rose to the top of a very qualified applicant group, and I look forward to continued excellence from DPD under Chief Howell.”

Chief Howell said, “I am very humbled and honored by the experience of this process and being selected to serve as the Dixon Police Chief.  I look forward to continuing the goals and current direction of the department.”

City Councilman Mike Venier said, “We had five very qualified candidates and the interview process was exhausting, but in the end, we could not be more satisfied with our selection.  The entire panel was very confident that Mr. Howell will serve this community well in his new position as Chief of Police.”

The Advisory Committee will consist of the following members:

Langloss said, “This was an incredible committee.  Having two law enforcement experts who are highly respected across the state and our own Sheriff Simonton really added to the value and merit of the process.”  Langloss added, “This was a very important decision, and I am confident that Steve can stand on his own two feet and lead our department into the future.”

Last modified on November 13, 2017 - 10:03 am
More in this category: « New Waste and Recycling Services Coming Soon Police Chief Selection Process »
back to top