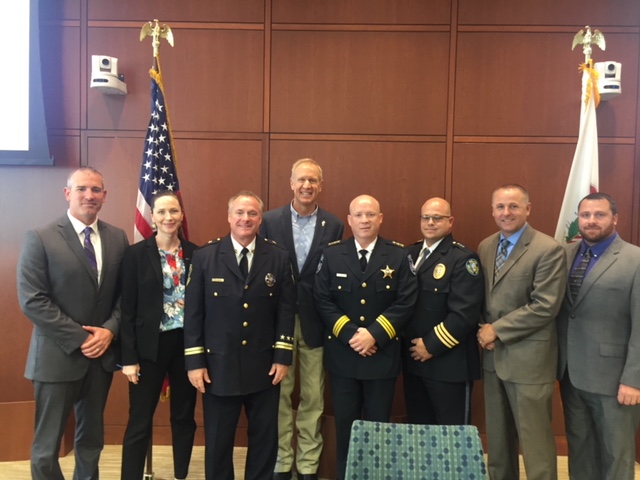 Shortly after 10 a.m. yesterday morning, Governor Bruce Rauner signed SB 3023 into law.  SB 3023, titled the Community Law-Enforcement for Deflection and Substance Abuse Treatment, is a historic bill aimed at combating the Opioid epidemic.  SB 3023 is the first of its kind legislation and recognizes a paradigm shift in law enforcements approach to those struggling with substance use disorder.  City Manager Danny Langloss said, “We cannot arrest our way out of this problem.  This is a smart on crime approach that is reshaping the ‘War on Drugs’.  In Dixon, we have seen incredible results.”

The idea to create this legislation came shortly after City Manager Danny Langloss (Ret. Chief of Police – Dixon), presented at a national opioid summit in Chicago in December of 2016.  It was there that Langloss met the National Director of Policy Initiatives for TASC (Treatment Accountability for Safe Communities), Jac Charlier.  Charlier specializes in system-level solutions to substance use and mental health challenges across the criminal justice system.  Langloss and other law enforcement leaders had spoken about creating police deflection legislation and Charlier offered TASC’s assistance.  TASC Director of Policy in Illinois, Laura Brooks, and Langloss assembled a team to work on drafting the legislation.  During this time, Langloss met Chief Eric Guenther who created the program, “A Way Out” in Lake County.  This program is very similar to Safe Passage.

Over the past year, Langloss, Guenther, Brooks and a team of subject matter experts worked to create the draft legislation.  Senator Tim Bivins and Representative Tom Demmer played key leadership roles in getting the bill passed in the Senate and the House of Representatives.

Langloss said, “This is a great day for law enforcement and those suffering from substance use disorder.  The national opioid epidemic continues to impact every community.  More than 72,000 Americans lost their lives last year to drug overdose.  Behind every death there is a family.  The police now have 5 new programs at their disposal that save lives and make communities safer.”

Programs like these fall into a new type of policing strategy called, Police Deflection.  Police Deflection are police programs that keep people out of the criminal justice system who are at a high risk of arrest, and instead, connect them to appropriate drug treatment.  The five types of programs are:  Self-Referral, Active Outreach, Officer Prevention, Officer Intervention, and Post Overdose Deflection.

Traditionally, police officers had two choices when dealing with someone suffering from substance abuse, arrest or not arrest.  This approach led to very high rates of recidivism amongst drug offenders.  Now, officers have the ability to connect people suffering from substance use disorder to treatment.  Following the first full year of Safe Passage, Dixon Police saw a 39% decrease in drug arrests.

The Safe Passage Initiative was the second police deflection program in the country.  Now, there are more than 300 police deflection programs.  Safe Passage was created by City Manager Danny Langloss and Sheriff John Simonton.  Through this program, someone suffering from substance use disorder can come to the police department, turn in their drugs and not fear arrest.  Instead they are connected directly to treatment.  Since September of 2015, Safe Passage has placed just under 300 people directly to treatment.  Most of these people were addicted to Heroin or other opioids.

Residents of Lee or Whiteside County needing assistance with a drug problem can walk into any of these departments and ask for help 24 hours a day, 7 days a week.  A Safe Passage website has been created and is located at Safe Passage Initiative.