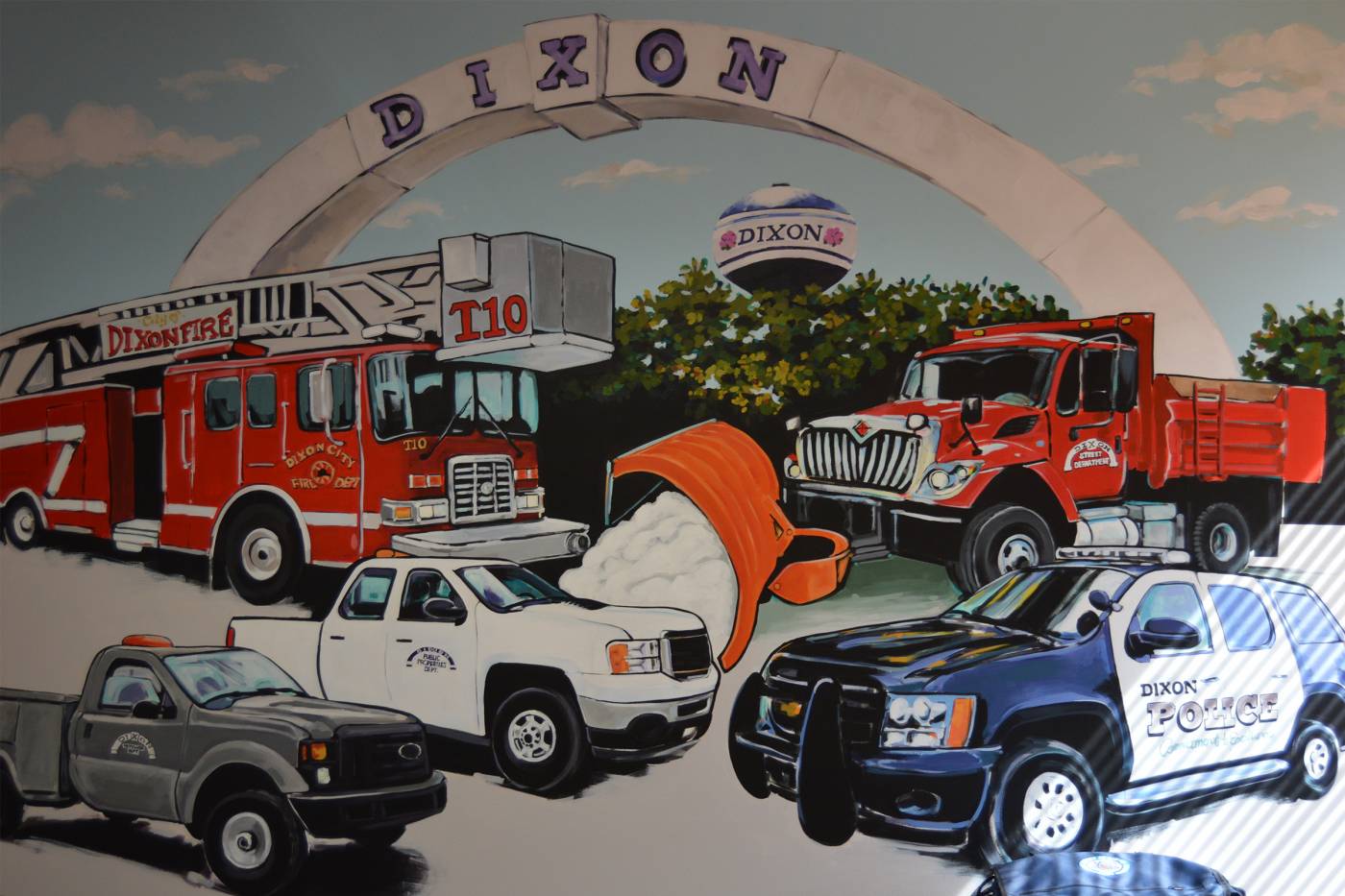 The last year has flown by and there are many accomplishments to be proud of in the City of Dixon.  After being appointed City Manager, the City Council established 5 primary goals:  (1) Infrastructure, (2) Economic Development, (3) Public Safety, (5) Open lines of communication between the Council and City Administration, and (5) Create a positive culture and team environment.  Our team is very proud to report that we have accomplished all of these goals and so much more.

Our leadership team is firing on all cylinders and employee engagement and performance has never been higher.  Within the first 2 months of our new administration, we hired an incredible Director of Public Works and a great Police Chief and Water Manager.  We led a committee to hire the new Executive Director of the Lee County Industrial Development Association.  Following the retirement of our Finance Director, we hired a very talented Finance Director and the Council appointed an excellent City Clerk.  We completely opened up lines of communication between the City leadership team and the Council, and we have energized our team of City employees.  Every member of our leadership team is 100% committed to Dixon and the citizens we serve.  We have placed a top priority on customer service and improving the quality of life for our community.

After creating this new leadership team, we began to examine all expenses, small and large.  For years, there had been thoughts to explore other options for city health insurance, personal property and workers compensation insurance.  We immediately created a team to look at these key areas, and as a result saved just under $900,000.00.  Of these savings, the City was set to receive a $600,000 increase in health insurance premiums for the next fiscal year.  We researched different health insurance programs and quickly eliminated the $600,000 increase.  We changed personal property and workers compensation insurance and saved $270,000 in the first year.

We restructured duties within city hall and created a city hall team.  This team is a one stop shop for citizens conducting business at City Hall.  This centralized team is able to help residents with all of their needs from one location.   As a result, we eliminated one staff position through a retirement and cut the human resources consultant for a total savings of $70,000.

Several positions were replaced in our Public Works Department.  We created a focus to strategically hire employees with specialize construction skills.  As a result, we have undertaken a major remodel of City Hall on the first and second floor.  A significant amount of the work is being completed by in-house staff.  The total cost of the project was reduced from $550,000 to under $300,000.  We also used in-house crews to refresh the Knack property the city bought last year for a savings of just over $15,000.  This space is currently the new home of Moxie Solar.

As part of our infrastructure work, Street crews are installing ADA ramps impacted in the 2 year $4.5 million street resurfacing project with a projected savings of $200,000 over the 2 year period due to in-house work.  Our Water Department is installing brand new water main on Depot Avenue from 5th Street south to Woodlawn Avenue for a savings of $150,000, and our water team is assisting UMI with the new water meter installation and has already installed 89 meters for a savings of just over $10,000.

In addition to these cost saving measures, our leadership team met with each department and completed a line by line detailed analysis for the FY19 budget.  We completed a comprehensive 70 page document that provides a complete insight to City finances, to include 5 year historical and 5 year projections for revenues and expenses.  This document is available to any resident to review.  It is a first of its kind document that gives a complete explanation of city finances.

Over the first 2 months of his tenure, Assistance City Manager / Director of Public Works Matt Heckman created a 2 year $4.5 million street resurfacing project.  Heckman created a team to examine street and underground infrastructure conditions.  His team also used a study completed by a local engineering firm that ranked all city streets on a 1-10 scale.  Streets were chosen on the following criteria: (1) Rating, (2) Traffic flow, (3) Proximity to other areas designated for resurfacing, (4) Visual inspections, (5) Condition of underground infrastructure.

Motor fuel tax, infrastructure sales tax, and Federal Department of Transportation Enhancement funds are the funding source for this project.  These are all restricted funds that can only be used for roads and underground infrastructure.

Year 1 of the two year street resurfacing program was a tremendous success.  85 city blocks were picked for resurfacing.  Late in the season, we learned that the project had come in $200,000 under budget.  With this savings, we were able to add 8 more city blocks for resurfacing, bring the total to 93 city blocks.  In addition to these 93 blocks, nearly all of the roads in Oakwood Cemetery were resurfaced.

In 2019, the street resurfacing plan includes 67 city blocks.  The primary funding source for these roads is the Federal DOT funds.

The City Council decided to move forward on a plan to update and remodel City Hall.  The approval came after City leadership created a plan to do a big portion of the project in-house.  City crews began work on the 2nd floor remodel in February and completed their work in late May.  A contractor was selected to do a portion of the 1st floor remodel, which included opening up a main wall and creating a customer service center.  City crews will finish the project over the winter.

This past year, the Waste Water team cleaned more than 8 miles of the city sewer system.  The new Hampton Lift Station is near completion.

Prior to the creation of the City’s new leadership team, there was very little communication between the City and other government organizations.  This administration has placed a significant focus on opening up lines of communication and created an intergovernmental team.  The first step in this process was the creation of an economic development team.  This new team consists of Lee County Administrator Theresa Wittenauer, Dixon Chamber of Commerce and Main Street President Stacey Colledge, Lee County Industrial Development Executive Director Kevin Marx, and City Manager Danny Langloss.

Over the past year, this team has been working to market the Dixon I-88 corridor, Industrial Park, and the Viaduct Point development.  Restaurant and hotel developers have shown significant interest in the I-88 corridor and Viaduct point.  This team has opened communication and developed relationships with land owners and many parcels of land have been made available for sale.  We expect significant progress in these areas in 2019.

This past year, this team recruited Moxie Solar and M & M Aviation to the City of Dixon.  Moxie Solar is one of the fastest growing companies in Iowa and plan to have 25 employees assigned to their new Dixon office within 2 years.  M & M Aviation has brought significant life to the Dixon Airport and helped bring a major community event this past summer.   In addition to these companies, a combination of several new stores and restaurants have opened in the downtown.

Early this year, we called a meeting and met with the new Executive Director of the Dixon Park District, Duane Long, Dixon Public Schools Superintendent Margo Empen, County Administrator Theresa Wittenauer, YMCA Executive Director Andrew McFarlane, and LCIDA Executive Director Kevin Marx.  The purpose of the meeting was to bring everyone together to discuss ongoing projects at each organization.  A key theme to the meeting was that we need more for our children to do in our community.  Information was also shared and discussed on the BUILD project.

Shortly following, visioning for a potential splash pad in Dixon began to occur.  This vision was shared with the local media and an anonymous donor pledged a $200,000 donation for the project.  An important factor to the donation was that these organizations were working together as one team to make Dixon better.

After several meetings with the donor and splash pad companies, the City and Park District are close to releasing design images for the splash pad.  It will be located near Wooden Wonderland and is expected to open June 1, 2019.

This team will continue to meet on a regular basis to keep lines of communication open.

SHARING INFORMATION WITH OUR COMMUNITY:

Transparency and fiscal responsibility are two of the most important tasks of any unit of government.  They are top priorities for the City of Dixon.  Shortly into his new role as City Manager, Danny Langloss worked with his team to create a new plan to share information with the community.  He worked closely with the new leadership team and the marketing coordinator to intentionally tell our story and share how our City team was working for our residents.

Since this time, there has been an incredible amount of information shared on the City Facebook page, we are designing a new website that is more user friendly, and we created a City twitter account.  These accounts are complimented by the police Facebook and twitter page and the fire department Facebook page.  More information is being shared with our community than ever before and we are constantly looking for new ways to connect to our community.

Over the next few months, the City will begin hosting “Listening Sessions”.  These listening sessions are designed to allow the community to meet with their City leaders and provide feedback and input on their community.  There will be a theme selected for each session and information will be shared with residents.  Residents will be able to ask questions and get more detailed information about their City government.

Dixon continues to be served by two of the top public safety departments in the country.  The actions of Officer Mark Dallas and our public safety team saved countless lives during the Dixon school shooting in May.  Officer Dallas was honored as the International Association of Chiefs of Police Officer of the Year in October.  The police department continues to strengthen the Safe Passage Initiative and the Mental Health Crisis Prevention Team.

Our fire department continues to perform at the highest levels.  The most notable impact was the day they brought Citizen of the Year John Groshan’s back to life.  He is truly an asset to our community.  He would not be here today if it were not for our highly trained fire department.

The goal over the next year is to keep these departments funded at status quo levels and continue to give them high quality training.

As the City Manager, I could not be more proud of the team we have created.  We have accomplished so much in this past year.  We are continuing to find ways to stretch the dollar to give our citizens a better value for their tax dollars.  We have an incredible group of people who love Dixon and are driven to make Dixon a great place to live, work, play, and raise a family.  If you have questions or suggestions we would love to hear them.  We are constantly looking at ways to make strategic progress for our community.